Testimony About the Power of the Rosary 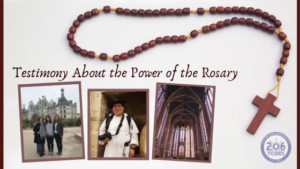 Heather Chastain Collins embarked on a trip to France with her mother and daughter in March 2019 just weeks before the devastating fire at Notre Dame Cathedral. Here, she shares her incredible account about the power of the rosary and the connection Pilgrims share, even across continents and unimaginable odds.

Testimony About the Power of the Rosary
By Heather Chastain Collins | July 18, 2019

Hi! I have an amazing story to share about a divine appointment! My Mom graciously treated my daughter and me to a Paris trip in March 2019. We live in Birmingham, Alabama so this was a dream vacation!

On Wednesday, March 27th we were visiting Sainte Chapelle, nicknamed the “Jewel of Paris.” It was commissioned by King Louis IX of France in 1238 to honor his collection of Passion Relics, featuring Jesus Christ’s Crown of Thorns. As we were reading a sign about The Crown of Thorns and how it came to France, a Friar graciously leaned over and said;

“You can venerate The Crown of Thorns at Notre Dame all day on Good Friday, and also on Fridays during Lent at 3pm for a couple of hours!”

I thanked him and we moved on among hundreds of tourists. I was aware of The Crown of Thorns being available to the public once a year on Good Friday but did not know it was also available on Fridays during Lent. We would still be in Paris that Friday and planned to go.

Words cannot begin to describe the gratitude I have for this Friar sharing this information with me! It was so random, that it had to be a gift from The Holy Spirit! On Friday, March 29th we went to Notre Dame and venerated the Crown of Thorns. My Mom, my daughter and I actually stood in line to touch and kiss it. Also, we bought prayer cards that we touched The Crown of Thorns with to bring back as third-class Relics to share with friends.

Had we been at Notre Dame that Friday and not been told what was going on, we would not have had a clue. The Knights of the Holy Sepulchre were completely surrounding the Priests holding The Crown of Thorns. At a quick glance, I would have assumed people were in line for a blessing or communion. Thousands of tourists filtered through both sides of roped off pews in total oblivion to what was happening.

Because this Friar took the time to speak to me for two minutes, we were able encounter Jesus Christ’s true Crown of Thorns! Three generations of women blessed with an opportunity of a lifetime!

Back stateside, on April 15th I was devastated to see that Notre Dame was on fire. We all prayed for The Crown of Thorns, other Relics, paintings, statues, all the priceless artwork to be saved. It was a relief when the news reported that the Relics were rescued. Even more so now after the fire, I understand and appreciate what a rare and precious moment in time we were granted! Thanks be to Jesus Christ, for an experience of a lifetime!

After our Paris vacation, I thought “if only I could thank the gentleman who told me about the opportunity to touch Jesus Christ’s Crown of Thorns!” This is what I know about him: he is a Priest or Friar, Asian ethnicity, he spoke with a British accent, had a professional camera around his neck and wore glasses. We spoke for about two minutes at Sainte Chapelle and were surrounded by hundreds of tourists.

There are 7.6 billion people on Earth. The chances of finding out who this gentleman was, was pretty much zero percent – almost impossible. However;

“With man this is impossible, but with God all things are possible”

On Tuesday, May 7th, I was scrolling through Facebook. “People you may know” popped up and I saw “Lauren” – a lady in my Rosary Group that meets every Tuesday, in Birmingham, Alabama. We were not connected on Facebook, so I clicked on her page to make sure she was who I thought she was…… and guess what I saw?! On May 6th Lauren posted a video of a Fr. Lawrence Lew singing the solemn Regina Caeli, a Dominican chant while in Jerusalem. IT WAS HIM – I was 99.9% sure! Fr. Lawrence was the Friar that I met in Paris at Sainte Chapelle!!!

Immediately, I sent him a message via Facebook messenger. A couple of days later, he responded and yes – it was him! Lauren had been on a 206 Tours Pilgrimage in Jerusalem with the Friar from London, England, that I met in when I was in Paris, France! God is so marvelous! Pure awe and amazement consume me as I try to wrap my brain around God’s timing and how He intertwines the smallest details! Lauren also posted a photo of herself with Father Donald Calloway having lunch! Jim Caviezel was on the same 206 Tour too – what an epic pilgrimage!

“Thank you for reaching out! God is awesome and his ways are perfect. I’m so amazed by this! I’m happy you got to venerate the Crown of Thorns. God loves his relics on earth because he loves us, and He knows how much our faith is helped by them. This is why God protected his relics despite that dreadful fire – for our sake. Speaking of your Rosary group – well, I run the Shrine of the Holy Rosary in London. Maybe you’ll visit us someday.”

Fr. Lew runs the “Shrine of the Holy Rosary” in London and I was able to connect again with him through my Rosary group in Birmingham, Alabama via 206 Tours! What an amazing testimony about the POWER of the Rosary!

We’re so grateful to Heather and Fr. Lawrence Lew for allowing us to share their remarkable story! For more about Fr. Lew, view this video filmed on his Pilgrimage to the Holy Land with Jim Caviezel below: