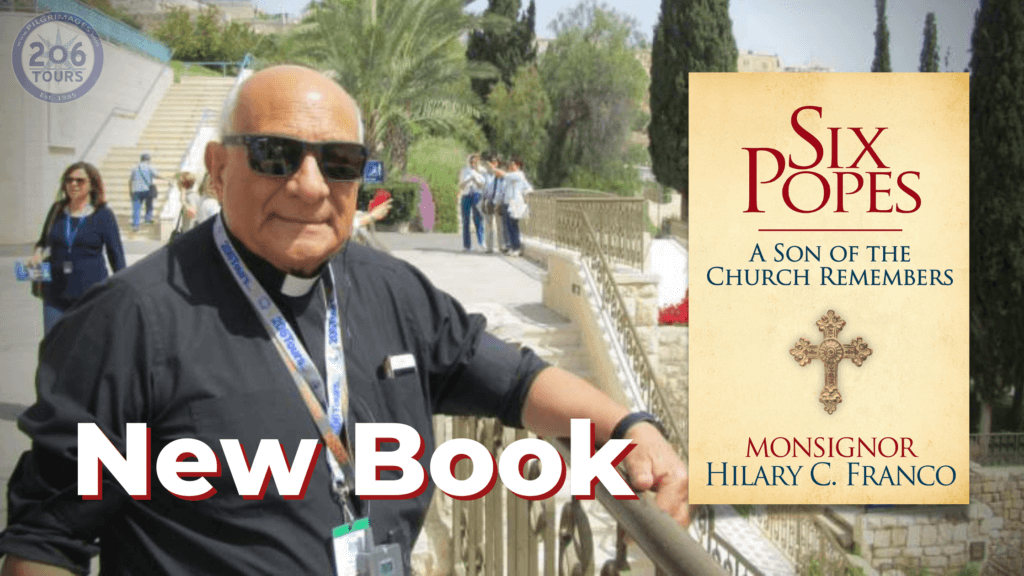 On April 9, 2021, Monsignor Hilary C. Franco celebrated the 66th Anniversary of his Priestly Ordination. This May, he will release his latest book, SIX POPES: A Son of the Church Remembers. The Book reflects on Monsignor’s personal accounts of historical moments and figures in the Catholic Church. He details his experiences and gathered lessons from his time serving under these six Papal Fathers; Pope John XXIII, Pope Paul VI, Pope John Paul I, Pope  John Paul II, Pope Benedict XVI, and Pope Francis. In his remarkable 66 years of service, Monsignor Franco has encountered and befriended many world leaders, fascinating public figures, and even Saints like Padre Pio and Mother Teresa, and soon-to-be Saints like the venerable Archbishop Fulton Sheen.

SIX POPES: A Son of the Church Remembers

Monsignor Franco continues to be a driving force in the Catholic Church through his work in the United Nations, and even still leads 206 Tours Pilgrimages. In 2019, he was a Spiritual Director on our very popular Pilgrimage to the Holy Land with The Passion of the Christ actor, Jim Caviezel, Fr. Donald Calloway, MIC, seven other incredible Priests, and 240 holy pilgrims from around the world. In 2021, Monsignor is leading a Pilgrimage to Poland in the footsteps of his late friend, St. John Paul II.

More on the Extraordinary Life of Msgr. Hilary Franco

In the late ’50s the Monsignor was the Assistant Pastor at several churches in the Bronx and on Staten Island. In 1962 he was the Assistant to Bishop Fulton J. Sheen at the National Office of the Propagation of the Faith in New York, a role that created a friendship that would last a lifetime. During this time, he was also a member of the Board of Editors of “World Mission” magazine and a contributor of Biblical articles to the “New Catholic Encyclopedia”. Even more impressive, Msgr. Franco worked on the preparation of the conciliar documents for the Second Vatican Council as a “peritus” or expert.

In 1967 he became the first New York Priest to ever be called to Washington, D.C. to serve in the Diplomatic Corps of the Vatican at the Apostolic Delegation. From 1968 to 1970 he was an Official of the Prefecture for Economic Affairs of the Holy See, before being named an official of the Congregation of the Clergy of the Vatican, a post he held for twenty-four (24) years in charge of the “English World”. It was in 1971 that he became a Monsignor, and ten (10) years later he was named a Prelate of His Holiness. Msgr. Franco became close acquaintances with Pope Francis years before he was named the Holy Father, and speaks of him as a true “man of the people” who reminded him very much of Archbishop Sheen. The monsignor also maintained close friendships with Popes John XXIII, Paul VI, John Paul II, and with Mother Teresa

Since 1994 he has been the Pastor of Saint Augustine’s Church in Ossining, NY. Currently, he is also a Judge of the Interdiocesan Ecclesiastic Tribunal which refers to the Court of Appeals for the entire State of New York, a board member of the Pontifical “Path To Peace Foundation”, an Adviser at the Office of the Permanent Observer of the Holy See to the United Nations and an active member of the “Catholic Biblical Association of America.”

His book, “Bishop Fulton J. Sheen: Mentor and Friend” is a compilation of over one hundred (100) letters received from the Venerable Archbishop Sheen documenting their lives and relationship. His amazing life has led to several International Awards, including “Solemare 1988” in Taormina, Italy, for popular International Television Programs (“Life is Worth Living”, “The Bishop Sheen Show”), and the first International Award “Civilizations Without Frontiers” which has been conferred also on that occasion to the Nobel Peace Prize Laureate Mother Teresa of Calcutta.

On April 28, 2019, Monsignor Hilary C. Franco honored his friend, St. John Paul II at St. Patrick’s Cathedral in New York City. The Divine Mercy Sunday Mass, celebrated by his Eminence, Cardinal Dolan, hosted the Polish Consulate and commemorated the fifth anniversary of the canonization of Saint Pope John Paul II. The next day Monsignor Franco jetted off to Israel for our 206 Tours Pilgrimage to the Holy Land with Jim Caviezel.