Located in County Mayo, Ireland, is the 2,507 foot mountain known as St. Patrick's Mountain or Croagh Patrick. In the year 441 St. Patrick fasted and prayed here for forty days, since that time a tradition of Pilgrimage honoring Irelandâs Patron Saint has lived on. Each year on the last Sunday in July, Pilgrims make the climb, many barefoot as an act of penance. The âTochar PhÃ¡draigâ or, âPatrickâs Causewayâ is an old Pilgrim road from Ballintubber Abbey to St. Patrickâs mountain. The route is about 18 miles long. In the 5th century a small chapel sat at the top of the mountain called âTeampall PhÃ¡draigâ, the remains of which were found in 1994. In 1905 another chapel was built on the summit.

Transportation: Croagh Patrick is located near Wetsport in County Mayo approximately 57 miles from Galway and 140 miles from Dublin. It can be reached by bus and train to Westport followed by a short 5 mile taxi ride. 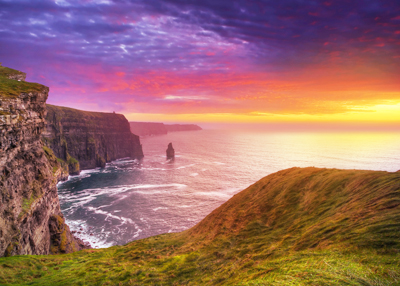