The Oberammergau Passion Play, the greatest story that was ever told, set in tiny Bavarian hamlet, is like no other play on the planet. It all began during a tumultuous period in 1633. During the Thirty Year's war, from 1618 to 1648, Germany had lost a substantial part of its population and Oberammergau was no exception. It was soon visited with the devastation of the "black death" in 1633 and residents of Oberammergau lost over half of their population. Sorrowful and repentant the villagers turned to God and prayed for salvation. Amidst this, Oberammergau citizens made a solemn vow; that from that point forward they would perform a Passion Play every 10 years! God heard their prayers and absolved them of their plight! After their vow, the village was free of the sickness and not a single person perished. The play continued from generation to generation; the torch would be passed and the show would go on! Tradition and authenticity are stressed and incorporated into every fiber of the Passion Play.

• The technicalities of the play are handled by everyone in the village. In order to take part in the play you must have been born or lived in Oberammergau for over 20 years. Preparation for the play begins early and holds steadfast in the coming months before the show is put on. Men whom are acting in the play must follow regulations that state they must grow their hair and beards for one year prior to the play. In fact, there are two actors for every one of the 21 lead roles in case someone falls ill, talk about dedication!

• The 2,000 citizens involved in the Passion Play take on jobs ranging from acting, signing, and orchestra to the technical support team. There are 124 talking roles, an orchestra comprised of 65 members, 48-person chorus and countless others involved in the background of the play making sure all runs smoothly. No detail is overlooked here, everyone takes their role very seriously.

• Prayers are held before the play in which the cast humble themselves and seek God to perform his will and spread the message of the Passion Play. • The Oberammergau Passion Play tells the story of the life, beginning with his entry into the ancient city of Jerusalem as well as His Trial, Crucifixion, Resurrection, and Ascension. This is done over the span of 16 Acts, in which some acts are preceded with a tableaux, a living still-scene depicting scenes from the Old Testament as a precursor to what will occur next in the play.

• Act II will begin at 8:00 P.M., and conclude at 10:30 P.M. What makes this performance so extraordinary is how the Stage truly comes alive! Not only in the decoration of the Set and the performance of the Actors, but with real animals and birds playing under the open sky. There are thirty-six (36) main actors who are dressed in white costumes, with their supporting cast dressed in greyish blue. The actors do not wear makeup, as that is their natural hair. Every scene is real, and live, so for example: the actor who is tied to the cross has to stay in that position for more than one (1) hour In between each scene, there are "Living Tableaus", where the live actors perform intricate sets of the Old Testament. You can never describe the feeling you get, as you see these stories being performed right in front of you.

• The play is held in a renovated open aired theatre that is praised for its superb acoustics and comfort, it can accommodate up to 4,800 people. Despite the play being performed in German, an English translation is provided for play-goers in their programs.

A Call to the Faithful!

206 Tours invites you to join us to join one of our 50 pilgrimage itineraries with a guaranteed Oberammergau Passion Play tickets which are being granted directly from the Passion Play Committee in Oberammergau. Come with 206 Tours we can assure you that 206 Tours pilgrims will be seated in great seats and will be accommodated with services and standards of 206 Tours.

Every 10 years Oberammergau sleepy village springs to life to put on a play that draws the eyes of the world upon it! Be part of the mission of the Passion of Christ, the greatest story ever told and spread the Gospel! Share His message of faith and love! It is surely a pilgrimage worth undertaking so that you may deepen your faith and resolve. The call goes out to faithful pilgrims across the world, to take the leap and embark on the spiritual journey of a life time. Don't wait until 2030, come with us in 2020!

The Catholic Church has certified the play by granting it a Missio Canonica or "canonical mission". This is a canonical certification that is necessary for preaching and emphasizes that the beliefs of the Church are being taught in a proper manner.

Will you be there? 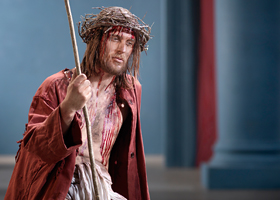 Additional Information about the Passion Play in Oberammergau, Germany, 2020: