St. Paul the Apostle in Greece 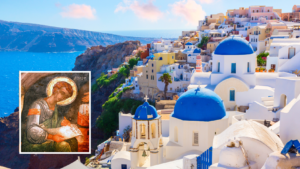 1. Philippi
Philippi was the city where Saint Paul the Apostle delivered his first sermon and where he established the first church in Europe. “And from there (He went) to Philippi, which is the leading city of the district of Macedonia and a Roman Colony. We remained in this city some days…” (Acts 16:12-18). Also, it is the site where Saint Paul baptized a woman named Lydia, the first convert to Christianity in Europe. The Roman Forum is where Saint Paul cast a spirit out of a fortune-telling woman. The prison (now in ruins) in which Saint Paul and Silas were thrown into by the owners of the fortune-tellers can still be visited here. The modern port city of Kavala, which was once the ancient Neapolis where Saint Paul, Silas, Luke and Timothy landed when they sailed into Europe.

2. Thessaloniki
In the winter of 49-50 A.D., Saint Paul wrote two epistles to the Thessalonians. These letters urged Christians to “live blamelessly” and to refrain from living idly while they wait for the second coming of Christ.

3. Athens
In Athens, visit Mars Hill where Saint Paul spoke to the Athenians about the one and only God (Acts 17:22).

4. Corinth
Ancient Corinth lies under the shadow of the towering Acropolis of Athens. Saint Paul lived in Corinth for two years. While here, he felt great grief over the way that the Gentile Church in Corinth had become. As a result, he was prompted to write four letters, all with the overarching theme of love. In Corinth, you will have the opportunity to view the site of Saint Paul’s trial by Gallio, as well as the remains of the first century shops, the Fountain of Peirene, and the Temple of Apollo.

5. Kusadasi & Ephesus
Head to Kusadasi to visit the small village of Mt. Koressos. While in this village, you will visit the small stone chapel that is situated upon the site where the Virgin Mary spent her last days following Christ’s crucifixion. Following this visit, your group will walk through the Magnesian Gate to the ancient Ephesus to visit the Great Theatre, the largest ancient theatre that had a capacity of 25,000 people and is a site where Saint Paul preached.

6. Heraklion
This morning you will awaken and transfer to the largest city on the island of Crete, Heraklion. While in this administrative capital, visit the ancient ruins of the Palace of Knossos. These ruins are the site where Saint Paul met the owner and captain of the ship who warned him of continuing his journey to spread Christianity in Rome.

Journey to Greece on a Catholic Pilgrimage in the footsteps of St. Paul