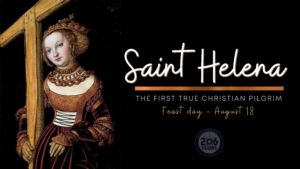 Saint Helena, or St. Helen, was the first true Christian Pilgrim! She was the mother of St. Constantine, who was born in Nis, Serbia in the year 272 and became the Roman Emperor in 306 A.D. Constantine legalized Christianity in 313 A.D., and St. Helena was crucial in spreading the faith and using her royal position and influence to build some of the most important churches in the Holy Land and across the Empire.

Saint Helena is credited with finding the True Cross and Church of the Holy Sepulchre. She is responsible for the construction of the Church of the Nativity. Among the many things she did to build Christianity, she also found the Holy Stairs that Jesus climbed during the night of his Passion. She took the stairs from Pilate’s palace to Rome. Pilgrims still visit these stairs to do and all who climb the marble steps on their knees, kissing the 28 steps that touched the bleeding feet of Jesus, are eligible to receive a Plenary Indulgence.

Many other Relics she collected can still be viewed in the Minor Basilica, the Basilica di Santa Croce in Gerusalemme or, Basilica of the Holy Cross of Jerusalem in Rome, Italy. The name of this Basilica derives from the soil St. Helena brought from Jerusalem to Rome, literally placing the Basilica on Jerusalem soil. The Basilica also holds two thorns from the Crown of Thorns, and a piece of the True Cross, among other relics. St. Helena’s Feast Day is celebrated on August 18th.

Saint Helena, Pray for us!