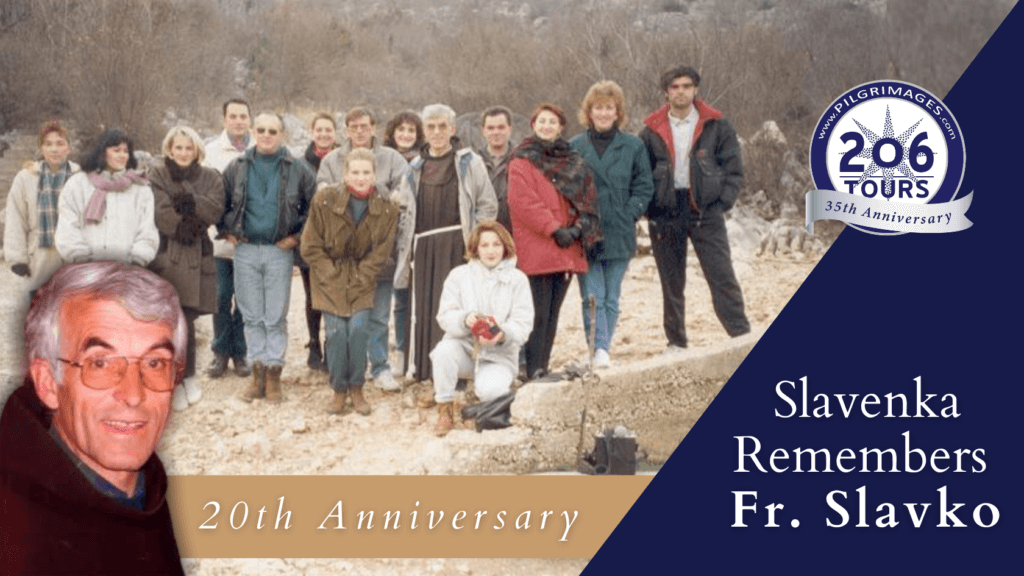 One life, one prayer.

One of the wisest pieces of advice we guides ever received was given by the late Fr. Slavko Barbarić.; “When you do not know what to talk about or what to do with your pilgrims, pray! Pray because one can never get enough of it!”

I know that in his life Fr Slavko prayed only once.  He started praying in his birthplace in Dragicina in his early childhood and he finished it on Cross Mountain on November 24, 2000. I know this very well, as I know that if he were to choose the place where his earthly life would end, he would choose one of the Medjugorje hills.

I know almost nothing about his childhood, but at the same time, I know everything. The story is not different than many other Herzegovian stories of that time. He lost his father early when he was only ten, and his mother took away plants growing amidst the landscape of rocky ground to feed her six children.  And no matter how much I try to imagine that little village boy in high school in “big” Dubrovnik or during his studies in Germany, I cannot. I cannot because from the moment of his birth, his skin was the Franciscan habit and Medjugorje. I just do not know if he weaved himself into Medjugorje or Medjugorje weaved him into itself. But I know that one cannot speak about the beginnings of Medjugorje without the late Fr Slavko.

My memories of him are the images, the sea of images of meetings. We, guides, all beginners in our work with pilgrims, as paratroopers would barge into his office asking him for advice. We would run after him to help us to resolve some delicate situation in the group. He used to tell us to walk with him and while walking he would help us solve our problems. Whatever his opinion was on these matters, it became a law to us.

I know that he loved to laugh a lot. He laughed at our silliness and jokes for days in a row. His laugh was as loud and genuine as little a child’s.

If you ask me if he was gentle, I will answer you: yes and no. He was gentle wherever the consolation and hope were needed but he also knew, the way Franciscans, Herzegovians do, to be harshly sincere. And in those years that was what we needed.  Youth is proud, ambitious. We were young and crazy and in need of some tough words to direct us so that we would not get lost.

He used to say that sleeping was a waste of time! I know that he slept a little. He was going to bed late in the night and was getting up very early in order to get to Podbrdo or Krizevac before dawn. In the Summers we climb the hills early in the morning to avoid the heat. And I know that I will be lying to you if I tell you that we were looking forward to meeting Fr. Slavko in the early hour. We all knew that besides the prayer he had one more mission: to pick up every little piece of litter from the hills, forgotten piece of paper, a plastic bottle, everything. Whenever he met us, in silence he would place into our hands a plastic bag to help him clean the litter. He knew about our silent resentment, but he pretended not to notice it. The wise man knew that we would remind each group does not leave anything behind. And today when I see guides from the old “gang”  how we pick up the papers from the Apparition Hill or Krizevac, I know that all of them, as I do, think about late Fr Slavko.  I know that all of them, as I do, have the feeling that the plastic bag was placed into our hands by Fr Slavko. I also know that they are surprised by themselves the same way I am.

He understood us better than we understood ourselves. I can recall when he held the seminar for us guides, a retreat of silence, fasting, and prayer back in 1994. Our silence on the retreat became conversation and laughter. He knew that we could talk a lot, that we can talk and listen at the same time. He was talking to us, a lot, because he knew that there was no other way to deal with us. We enjoyed it so much that at the end, a few days later, we told him that he could talk as much as we do, that with our approval he could become one of us. And of course, we did pray. We prayed a lot because we knew that that was the only way we could deal with him. The prayer was his fuel, the muse for all his projects. He taught us the prayer and left it with us.