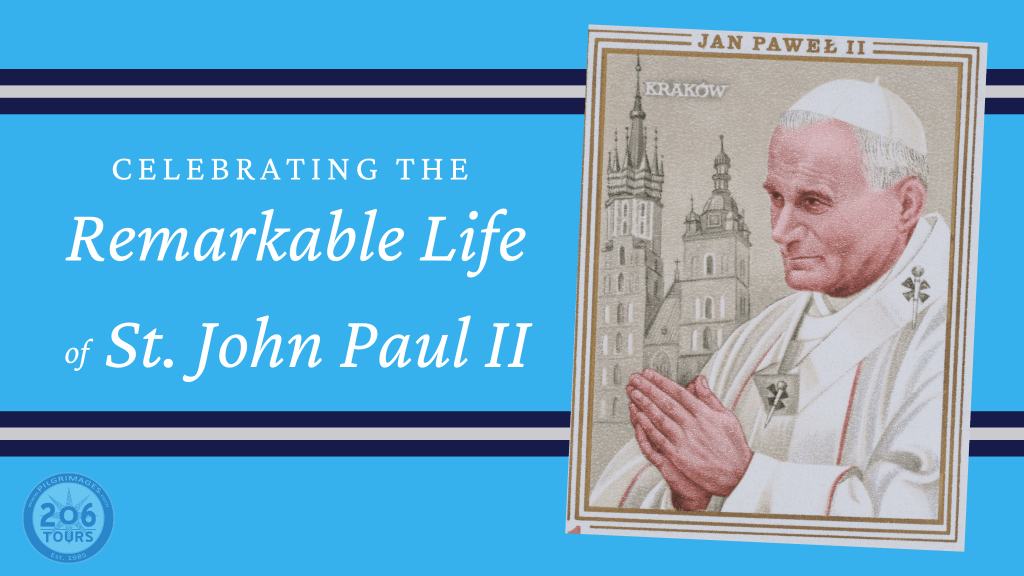 The Centennial (100th) Birthday of Saint John Paul II, took place on May 18, 2020. His life of service and eternal life of Sainthood is so remarkable and has changed the lives of countless people. Here are some interesting facts about the remarkable life of the famous Polish Pontiff.

St. Pope John Paul II was born Karol Józef Wojtyła in Wadowice Poland. When he was just a young boy, his mother died in childbirth and before he was 20 years old, he had also lost his brother and father. After his father’s death in 1941, he began courses at the clandestine underground seminary which was run by the Archbishop of Krakow. Several times, he escaped death in freak accidents and even avoided the Gestapo, which, to him, confirmed his calling to become a priest.

Throughout the Nazi regime, while still a seminarian, he is attributed with saving the lives of several Jewish children which led to him receiving the medal of a “Righteous Among the Nations”. In 1946, he was Ordained on All Saint’s Day. Just a year later, when visiting and confessing to Saint Padre Pio, St. Padre Pio shared a prophecy that he would someday ascend to the highest post in the Church.

In 1953 he began teaching Ethics at the Jagiellonian University where he gathered a small group of young people, who affectionally referred to themselves as “Rodzinka” or “little family”. They often met for prayer and enjoyed activities like skiing and kayaking together. The group grew to about 200 people and Saint Pope John Paul II became known as “Wujek”, the Polish word for “Uncle”. Upon being named Auxiliary Bishop of Krakow, he assured his little family, “Wujek will remain Wujek”. This nickname is still affectionately used mostly by Polish Catholics.

As a participant in the Synod of Bishops, he had a good relationship with Blessed Pope Paul VI. He was appointed the Archbishop of Krakow by Pope Paul VI in 1964 and subsequently played a key role in creating the encyclical “Humanae vitae”.

He was elected Pope on October 16, 1978 – and remained Pontiff until his death in 2005, making him the second longest-serving Pope in modern history. One of the most popular Pontiffs, he often attracted large crowds – like in 1995 when nearly four (4) million worshipers came to see him at the World Youth Day in Manila. The Vatican recognizes this as the largest Papal gathering ever! 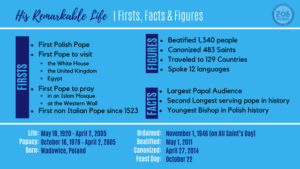 Catholics in Poland, and all over the world, still maintain a deep love for Saint Pope John Paul II, and will no doubt celebrate his life on what would have been his 100th Birthday. Many will travel to Poland to walk in his footsteps and make a spiritual Pilgrimage. Learn all about this Pilgrimage, here: Tour 168