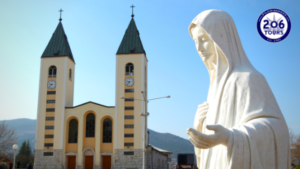 May 13, 2019 became a historic day for Medjugorje, as Pope Francis “officially” announced that Christians and Clergy throughout the world are free to make a Pilgrimage to Medjugorje. The announcement was made at the 8:00 A.M. Mass at St. James Parish in Medjugorje – celebrated by Archbishop Henryk Hoser, as follows:

“Pope Francis declared the possibility of Official Pilgrimages to Medjugorje. Always remembering that this is not a recognition of the events which take place in Medjugorje. There needs to be more collective investigations from the church. This must not cause any misleading or confusion as far as church doctrinal matters. With this in mind the declaration of Pope Francis- means that all clergy from all stations of priesthood to the hierarchy are permitted and those willing to go to Medjugorje to a solemn celebration”

Just less than one year prior (May 31, 2018), the Holy Father appointed Archbishop Hoser (from Warsaw) to be the Apostolic Visitor to Medjugorje. The Archbishop was assigned as a “special envoy” with the mission in order to determine the pastoral needs of the Parish of St. James, given its increasing popularity as a place for prayer and pilgrimage. To date, Medjugorje is seeing approximately one (1) million pilgrims per year.

Medjugorje has a particularly special role in 206 Tours, as it was the inspiration for the company’s founding, and mission to help Catholics connect with their faith through Pilgrimage.

June 25, 2019 marks the 38th Anniversary of the Marian Apparitions of Our Lady of Medjugorje. Join us in prayer for Medjugorje, for Archbishop Hoser, all of the Pilgrims and Clergy who will be traveling with us there in the future, and for world peace!