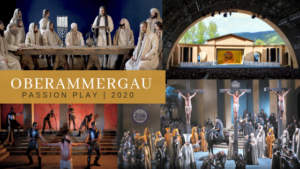 The small village of Oberammergau, in Bavaria – Germany, is home to the world-famous Passion Play. For over four (4) centuries, the people of this special town have upheld the tradition to put on the play every ten (10) years.

The tradition began in 1633 after the villagers vowed that if God spared them from the bubonic plague raving Europe – they would host a play depicting the life of Jesus every ten (10) years from then on after. In keeping with their vow, the first production took place in 1634 and has continued every ten (10) years since, with a few exceptions.

The play follows Jesus’ final moments, from the last Supper to His Crucifixion. The play was written by Othmar Weis, J.S. Daisenberger, Otto Huber, Christian Stuckl, Eugen Papst, Marcus Zwink, Ingird H Shafer, various villagers, and Rochus Dedler, who also wrote the music, and has gone through various revisions over the years to become more accepted by both the Catholic church, and people of all nations. In 1922, the Catholic church gave the play a Missio Canonica designation, recognizing the beliefs of the Catholic Church are being taught. 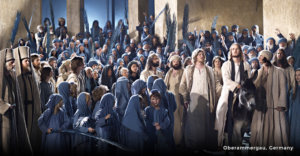 The whole production is made up of over 2,000 people including, 500 children, a 70-piece orchestra, a 120-member chorus, technicians, artists, seamstresses, and more – all of whom are Oberammergau residents. In order to take part in the Play, you must either be born and raised there or have spent at least 20 years of your life there. As preparations are well underway for 2020, the 2010 performance saw 102 performances take place between May and October, with an attendance of more than half a million people. The open-air theatre has gone through many renovations and can now accommodate an audience of over 4,700 people. The village expects 450,000 people to witness the 42nd production in 2020.

Records show that in 1930, the Play ran for seven (7) hours – from 8 am to 5p m! More recently, the play has taken place in the afternoon and evening, with a meal break during an extended intermission. The 2020 production will run from May 16th to October 4th, with playtimes changing to align with the daylight.

Experience the “Passion” like you never had before by visiting this magnificent and historical village on one of 206 Tours many Pilgrimages stopping in Oberammergau in 2022 (The Oberammergau Passion Play 2020 performances were postponed in March 2020 due to concerns about the Coronavirus). Space is filling up very quickly, with many dates already Sold Out!