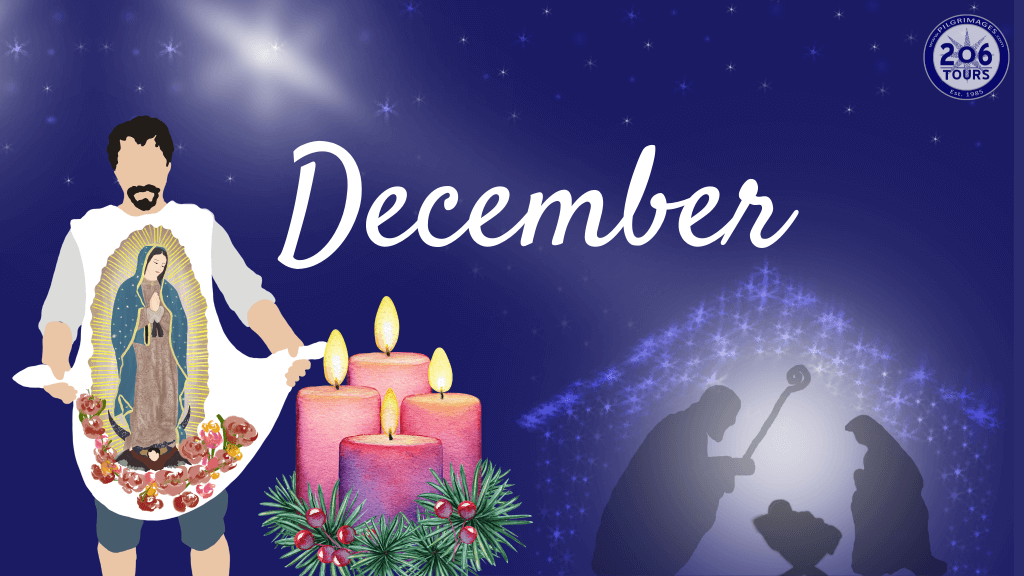 December 8: The Feast of the Immaculate Conception

Though many people may believe this Feast refers to Mary’s Immaculate Conception of Jesus, this holy day of obligation actually refers to the conception of the Virgin Mary in the womb of her mother, Saint Anne.

Catholicism teaches us that all humans are born with original sin with the exception of Mary since she was kept “immaculate” from the moment of her conception. To recognize this feast, each year the Pope lays a wreath at the foot of the statue of the Madonna, located in the Piazza Miganelli in Rome.

Our Lady of Guadalupe is also known as the “Patroness of the Americas” for her love for all the Western world, and her foreshadowing of the exploration and explosion of Catholicism that would take place in the New World.

She first appeared to visionary St. Juan Diego on December 9, 1531 at Tepeyac Hill in Mexico. Juan Diego tried to tell the Archbishop what he had seen but he did not believe him. On December 11th, Juan Diego’s uncle fell ill, and on December 12th he was cured, and the image of the Virgin Mary again appeared before Juan Diego but this time in front of the Archbishop. Her image appeared in his cloak, or the Tilma, which can still be seen at the Basilica.

Many pilgrims visit the Shrine of Guadalupe each year, you can learn more about our departures to Mexico City here.

December 25: Christmas, the Nativity of Our Lord

Christmas is without a doubt the most well-known Catholic Holy Day of Obligation, next to Easter. Every year on December 25th, Catholics worship the Nativity of the Lord, focusing on the newborn baby Jesus, the day when God became human. In preparation for Christmas, Catholics observe the season of Advent, the time we wait for our Lord to be born. Advent begins on the fourth Sunday before Christmas, as Churches light one candle each Sunday on an Advent wreath. There are three purple candles and one pink candle which is lit on the third Sunday. All the decorations and Feasts that Catholics practice this time of year are to culminate at this time, to rejoice in the celebration of Jesus’ birth, and the coming of Our Lord.