In honor of Saint Pio of Pietrelcina, also known as Padre Pio, we’d like to celebrate his inspiring and amazing life and legacy by sharing some of our favorite words of wisdom that he imparted to us during his life on earth.

Francesco Forgione was born on May 15, 1887, to Italian peasant farmers. Padre Pio was known to have expressed a strong desire to dedicate his life to God as early as five years old. In 1903, he became a Friar at the young age of 15 and was ordained as a Priest in 1910. After his death on September 23, 1968, Saint Pope John Paul II beatified Padre Pio in 1999 and subsequently canonized him in 2002.

Saint Padre Pio is perhaps most famously known for his stigmata, visions, and the gift of healing. He is recognized as the Patron Saint of Civil Defense Volunteers as he served in the military as a Friar in World War I. He spent much of his life ill and in pain, yet remained extremely faithful, hopeful, and even joyful. For this, he is venerated as a symbol of hope – inspiring and consoling those in times of struggle through unwavering faith.

Here are a few of our favorite quotes from Saint Padre Pio:

1. “Pray, hope, and don’t worry. Worry is useless. God is merciful and will hear your prayer.” 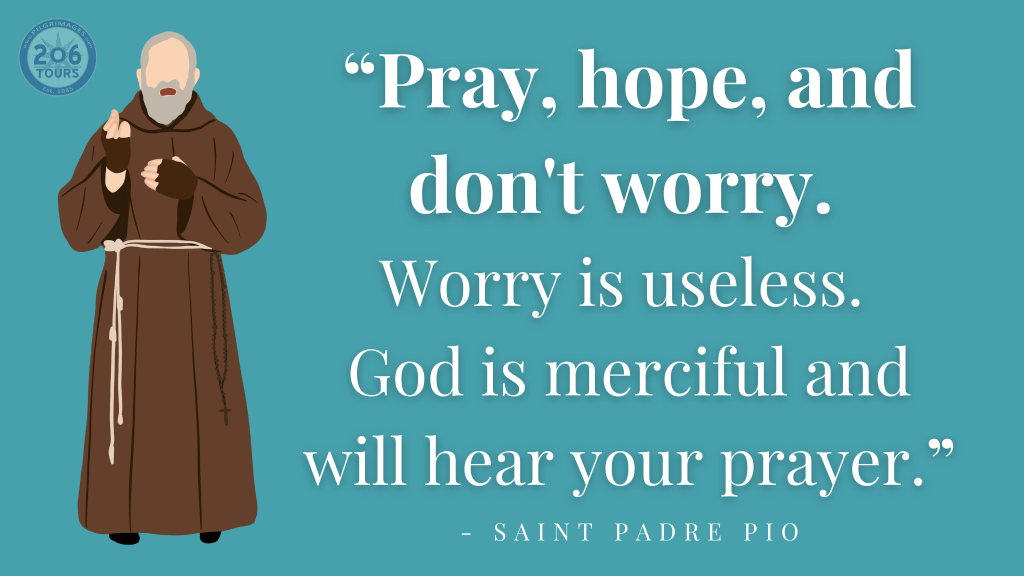 2. “Prayer is the best weapon we have; it is the key to God’s heart. You must speak to Jesus not only with your lips but with your heart. In fact, on certain occasions, you should only speak to Him with your heart.”

3. “The longer the trial to which God subjects you, the greater the goodness in comforting you during the time of the trial and in the exaltation after the combat.”

4. “Joy, with peace, is the sister of charity. Serve the Lord with laughter.” 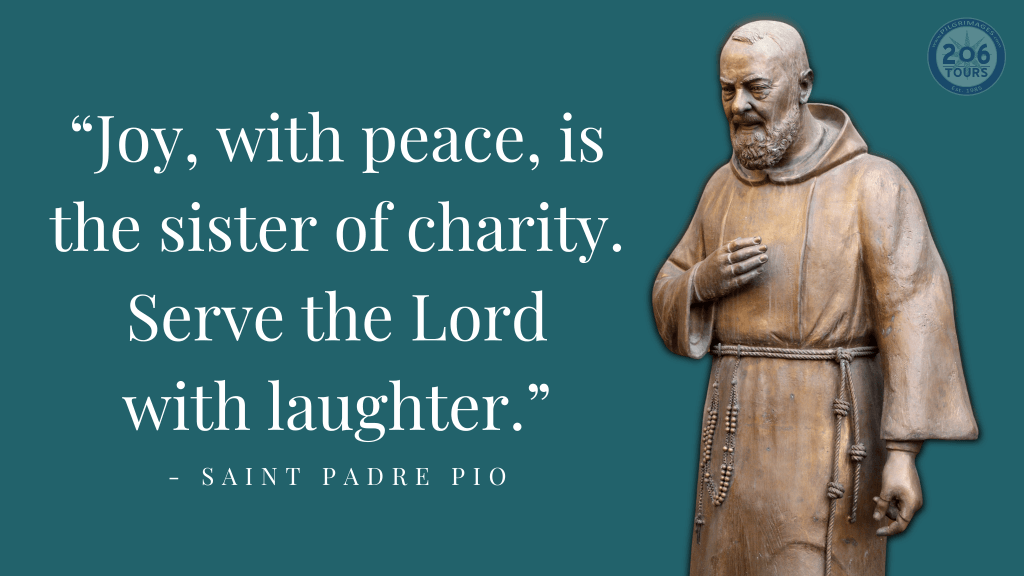 5. “Jesus is with you even when you don’t feel His presence. He is never so close to you as He is during your spiritual battles. He is always there, close to you, encouraging you to fight your battle courageously. He is there to ward off the enemy’s blows so that you may not be hurt.”

6. “The most beautiful act of faith is the one made in darkness, in sacrifice, and with extreme effort.” 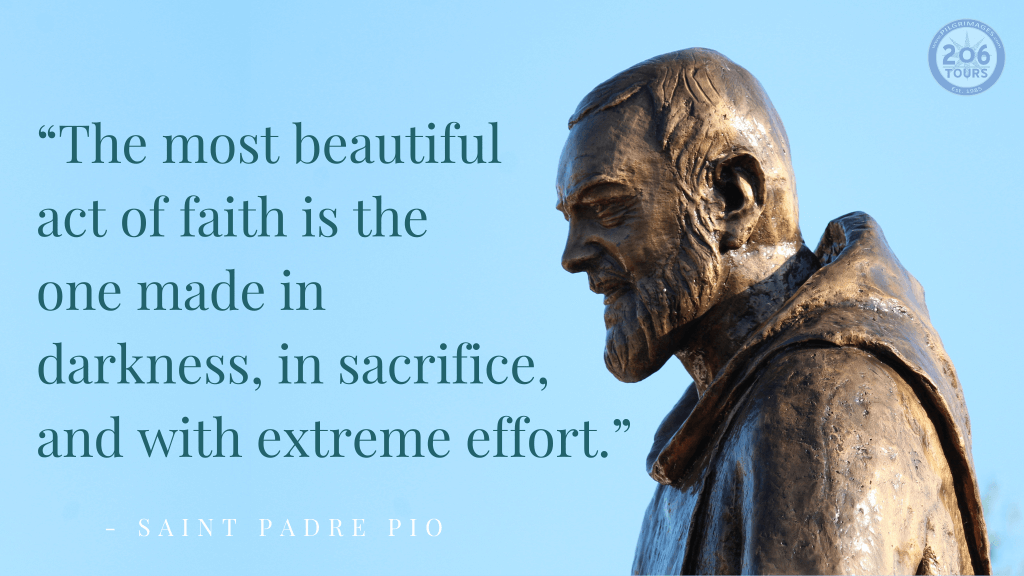 7. “The storms that are raging around you will turn out to be for God’s glory, your own merit, and the good of many souls.”

8. “You must have boundless faith in the divine goodness, for the victory is absolutely certain.”

9. “My past, O Lord, to Your mercy; my present, to Your love; my future to Your providence.” 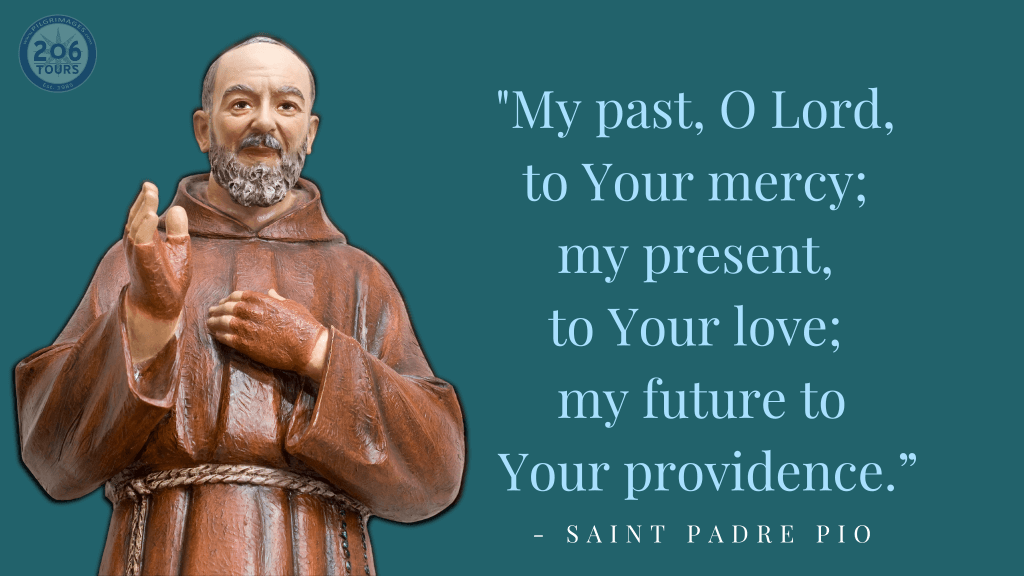 10. “You complain because the same trials are constantly returning. But look here, what have you to fear? Are you afraid of the divine craftsman who wants to perfect His masterpiece in this way? Would you like to come from the hands of such a magnificent Artist as a mere sketch and no more?” 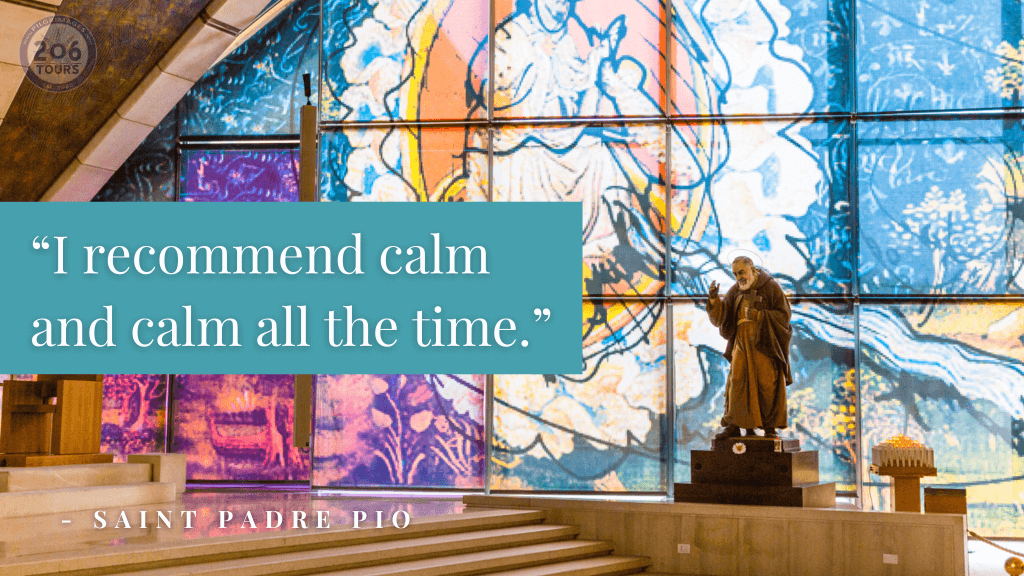 12. “How unbearable is pain when suffered far from the Cross, but how sweet and bearable it becomes when it is offered close to the Cross of Jesus!”

13. “If we earnestly endeavor to love Jesus, this alone will drive all fear from our hearts and soul will find that instead of walking in the Lord’s paths, it is flying.”

14. “The greater your sufferings, the greater God’s love for you.” 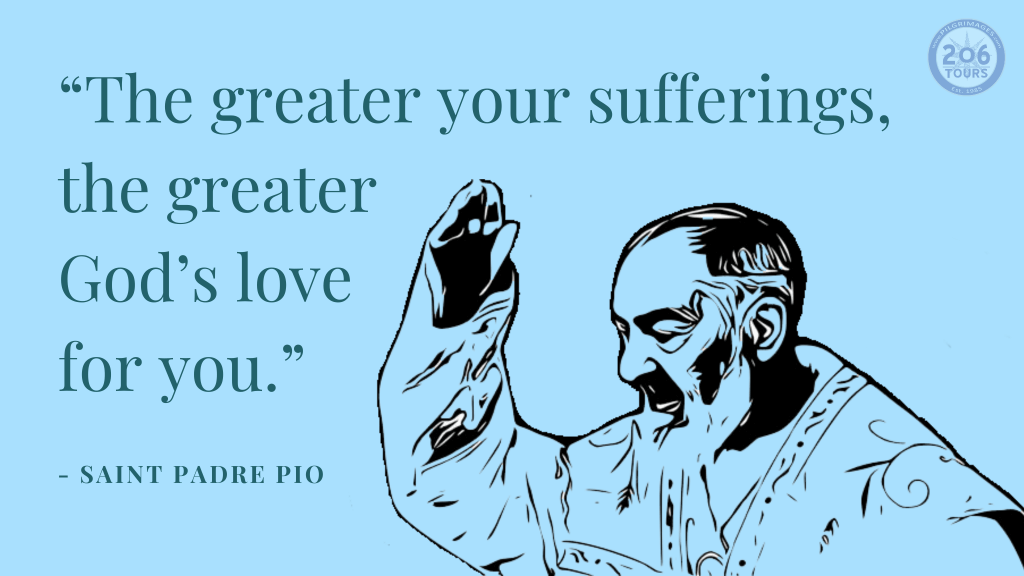